We value the equality, diversity and human rights of our staff and service users. As a public body each NHS organisation has a duty to ensure that, wherever possible, everybody can use or receive its services to the same standards regardless of:

We are committed to supporting the establishment of network groups in partnership with:

Amongst a number of training programmes we are ensuring that all our staff receive equality training through our mandatory induction programme and periodic updates.

We are also developing and implementing a number of supplementary training programmes. These will provide in depth information on equality for staff such as equality analysis, bullying and harassment. 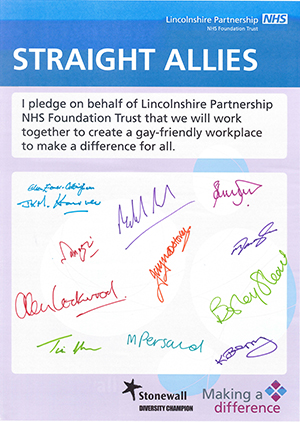 Straight people have a critical role to play in creating gay friendly workplaces They are key to advancing fair treatment of:

The Trust Board of Directors has shown its support to promoting LGBT agenda by signing straight allies pledge to work together in order to make LPFT a gay-friendly workplace.

Straight allies is an initiative championed by Stonewall. It is a part of our ongoing work to promote workplace culture where people are comfortable being themselves and to protect the staff from homophobic discrimination.

Signing the straight allies pledge sends a clear message about the values we support as an organisation. An involvement of straight people in supporting LGBT colleagues can have a tremendous effect on the culture of the workplace and the experience of staff, both gay and straight. If we can create an inclusive environment where people are able to be themselves, then they: